Joy Oladokun, a queer Nigerian-American singer, songwriter, and musician is one of the biggest rising stars in music right now. Originally from Arizona and currently based in Nashville, fresh off her TV debut on Jimmy Fallon with her breakout song “breathe again,” last month. She followed up the performance with another incredible performance of “breathe again” on the TODAY Show on last week. The song was featured on the emotional peak of NBC’s This Is Us during the last episode and catapulted her into the forefront as one to watch.

At just 10-years old Joy was inspired by Tracy Chapman; it was her first time seeing a black woman play the guitar. Since then that kid with a big dream has gone on to accomplish becoming a member of the inaugural #YouTubeBlack Voices Class of 2021 as well as an NPR Music/Slingshot’s 2021 Artists to Watch, a Billboard LGBTQ Artist of the Month, Spotify’s RADAR US: Artists to Watch 2021, Amazon Music’s Artists to Watch 2021 and Vogue’s #1 New LGBTQ Artists To Listen to Now. Also, later this month, she will be featured as part of HULU’s “Your Attention Please: The Concert.” Created in partnership with MSG Entertainment, the musical event held on February 18 will be hosted by Craig Robinson and feature performances by five groundbreaking artists: 24kGoldn, Oladokun, Kiana Ledé, Lil Yachty and Swae Lee.

After gathering 20 million-plus streams and attracting acclaim from People, Vogue, American Songwriter, and more, her words arrive at a time right when we need them the most. “Words are such a powerful tool,” she states. “I remember all of the best and worst things anyone has ever said to me. I love and respect the ability of words to touch on the physical realm. I’m very intentional with my words. I’m grateful and try to be as encouraging as I can, because I’ve been in situations where that has not been the case and it’s hurt me or others. People are traumatized by words or uplifted and encouraged to change their lives and careers by them.” The daughter of Nigerian immigrants, she was the first in the family to be born in America. After some ime in Delaware, they moved to Arizona. Dad’s record collection included hundreds of titles, and he introduced Joy to everyone from Phil Collins, Peter Gabriel, and King Sunny Adé to Conway Twitty and Johnny Cash. As mom and dad stressed academics, she wasn’t allowed to watch TV on weekdays. On Saturday, they would “either rent a movie from Blockbuster or watch the thousands of hours of concert and music video footage dad had recorded since coming to the States.” One afternoon, she witnessed Tracy Chapman pay homage to Nelson Mandela during his 70th birthday tribute at Wembley Arena.
It changed everything… 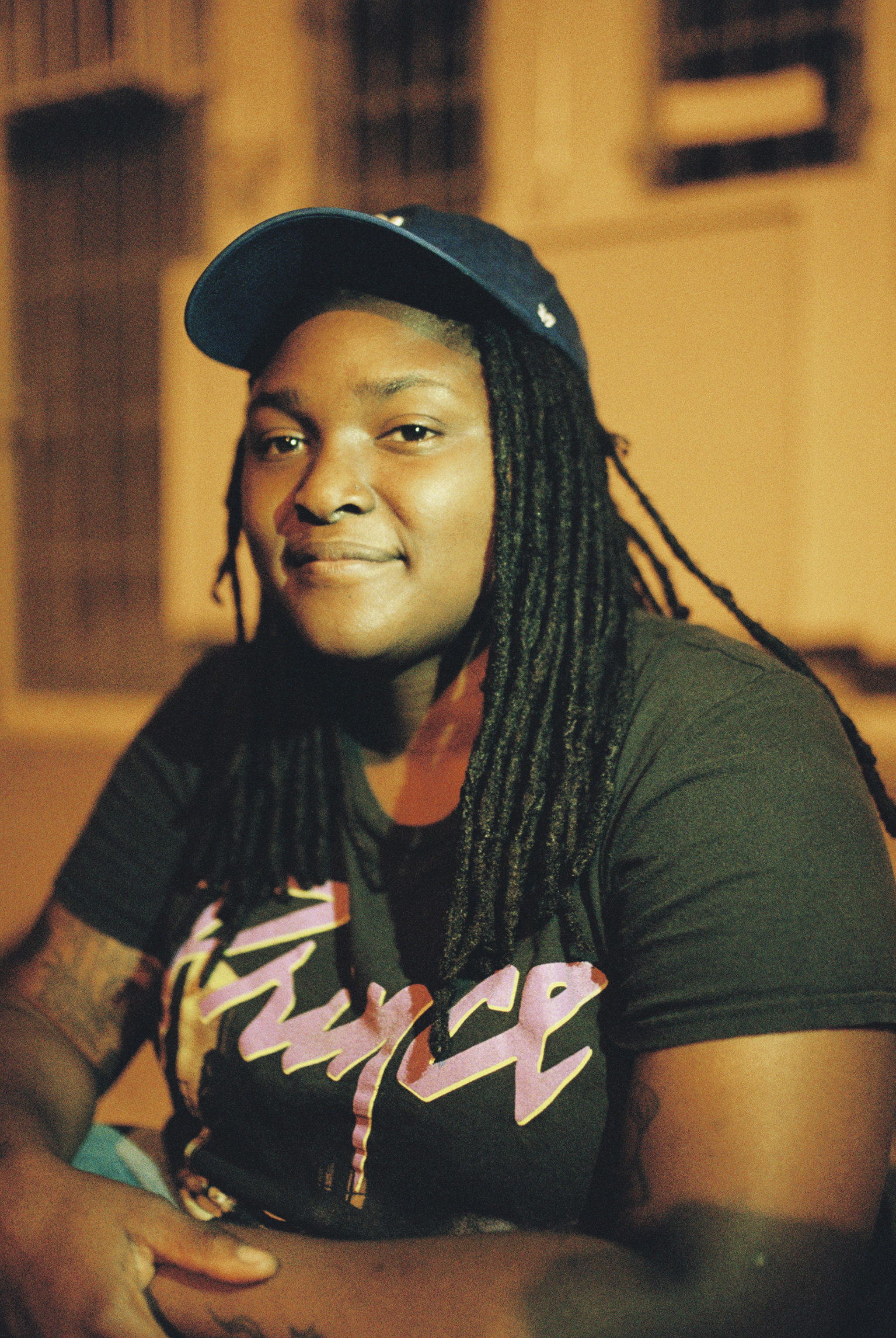 “I grew up in Casa Grande, which is in the middle of nowhere in Arizona,” she goes on. “I was surrounded by images of white dudes with guitars. I was programmed to believe people around me listened if somebody had a guitar. As a shy kid and one of the only black children in town, I had a lot of social anxiety. Seeing Tracy Chapman up there with a guitar in front of a full stadium was such an empowering moment. I ran into the next room and begged my parents to buy me a guitar for Christmas—which was six months away,” she laughs.

With her new Christmas gift, she went from crafting her first song about The Lord of The Rings to penning songs dedicated to her mother after rough days at work. Eventually, the local church needed a guitar player, and she ended up working there full-time for almost six years. After college in Orange County, she relocated to Los Angeles where writing became a job…and she finally came out. “I quit the church and came out of the closet,” she recalls. “I got to a point where I was like, ‘If God exists, he does not care that I’m gay. With all of the things happening, he cannot give a shit’. I feel like it’s not an accident I’m a queer black woman writing and making music.”

In 2016, she wrote and recorded countless songs alone in her Los Angeles apartment. Her music and story galvanized a growing fan base as she completed a successful Kickstarter campaign to release her independent debut, Carry. During 2018, her song “No Turning Back” soundtracked a viral baby announcement by Ciara and Russell Wilson, opening up the floodgates. She landed a string of high- profile syncs, including NBC’s This Is Us, ABC’s Grey’s Anatomy, Showtime’s The L Word: Generation Q,and MTV’s Catfish. Around the same time, she settled in Nashville, TN and continued to create at a feverish pace. On the heels of in defense of my own happiness (vol. 1), she garnered unanimous critical praise. Billboard touted the album as one of the “Top 10 Best LGBTQ Albums of 2020,” while NPR included “i see america&quot; among the “100 Best Songs of 2020.” Predicted as on the verge of a massive breakthrough, she emerged on various tastemaker lists, including Spotify’s RADAR Artists to Watch 2021, YouTube “Black Voices Class of 2021,” NPR’s 2021 “Artists To Watch,” and Amazon Music’s “Artist To Watch 2021.”

We got a chance to speak with Joy to discuss her upbringing, making her national television debut, being apart of the LGBTQ community and representing as an artist, her dream collaborations, favorite hip-hop album + much more. Get into the interview below.

Being a Queer Artist

What RESPECT. Means To Her

RESPECT. Interview: Lil Migo Talks “King Of The Trap” Project, His Reaction to Blac Youngsta Gifting Him a Lambo

Hip-hop artist Lil Migo released his new project, King Of The Trap, which included collaborations with Yo Gotti, Moneybagg Yo, Jacquees, Rich the Kid, 42 Dugg, Blac Youngsta and more. The Memphis native dropped the project …

Rap Legend Big Pun is Immortalized in the Bronx